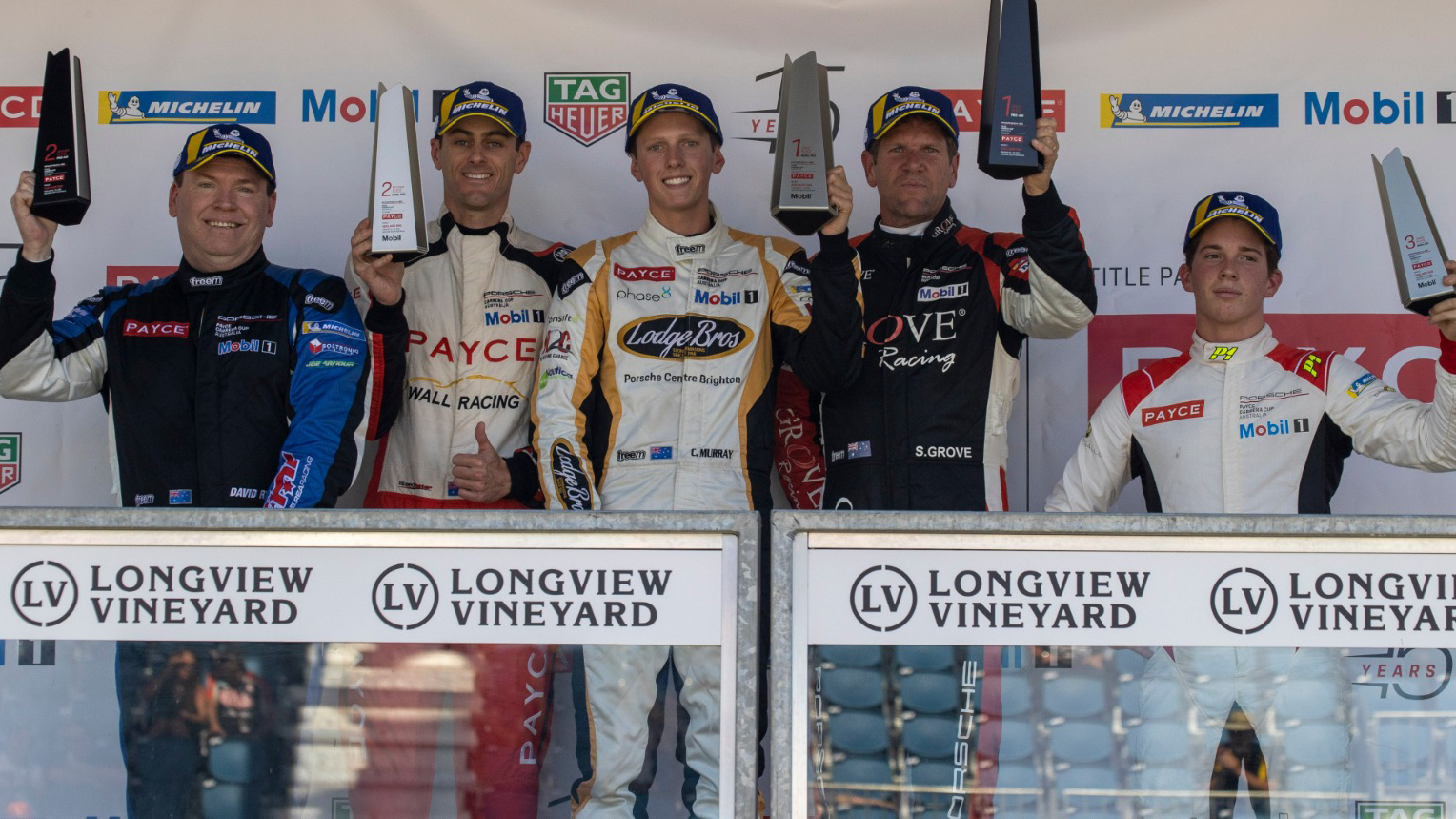 A CLEAN SWEEP of all three races has delivered Porsche Michelin Junior driver Cooper Murray victory in the opening round of the 2020 Porsche PAYCE Carrera Cup Australia championship.

The 18-year-old swept the Mobil Pro class on the streets of Adelaide, winning an abbreviated third race of the weekend after once again making a near-perfect start from pole position and leading the field through the opening lap.

Murray took his sixth career race victory behind the Safety Car, leading David Wall and Dale Wood home – while he headed Wall and fellow Michelin Junior Aaron Love in the overall round results.

After contact saw class pacesetters Max Twigg and Dean Cook removed from the final race, bringing out the Safety Car, former champion Stephen Grove was in the best position to capitalise and won the Pro-Am round over David Ryan and Twigg.

Murray, however, never put a foot wrong all weekend to kickstart his campaign in style aboard his McElrea Racing / Phase 8 Porsche 991 GT3 Cup Car.

“It’s a great way to start our 2020 campaign – three races, three wins and the championship lead, you can’t ask anything more than that,” Murray said.

“It’s a great confidence boost going into the Grand Prix in a few weeks, as well as the Porsche Michelin opportunity to head to LeMans and watch that race with Porsche.

“It’s been a great start to the season.”

The round win is the second of Murray’s young career; the Victorian having also swept all three races and the round in Townsville last July.

A trio of second positions set David Wall’s quest for a second championship title underway in style, while Love’s podium came in just his second ever round.

Love and teammate Dale Wood battled in the opening lap of today’s race, the latter making a flying start from the third row and challenging Wall for second before the race was neutralised.

The incident that saw the race finish under Safety Car came when Twigg and Grove were battling for the ProAm class lead on the opening lap, the former spinning across the circuit at turn 10 before being collected by Cook – who had no where else to go.

While both drivers climbed from their cars under their own power, Twigg was taken to the medical centre for precautionary checks following the hefty impact.

The impact moved one of the concrete barriers that line the temporary circuit, necessitating lengthy repairs that ultimately saw the race finish behind the Safety Car.

With Twigg and Cook out of the running, Grove ultimately scored his 14th career Pro-Am victory over an impressive David Ryan, with Twigg retaining third overall.

“It’s funny this sport, you’ve got to keep chipping away,” Grove said.

“Practice was good, the day after that in qualifying and the first race wasn’t great, but we brought ourselves back into contention in race two and managed to come away with the win in race three.

“It was an unfortunate situation with Maxy and Cooky at the end and I pass my best on to them.

“It’s great to get another win and head to the Grand Prix in Melbourne and see what we can do there.”