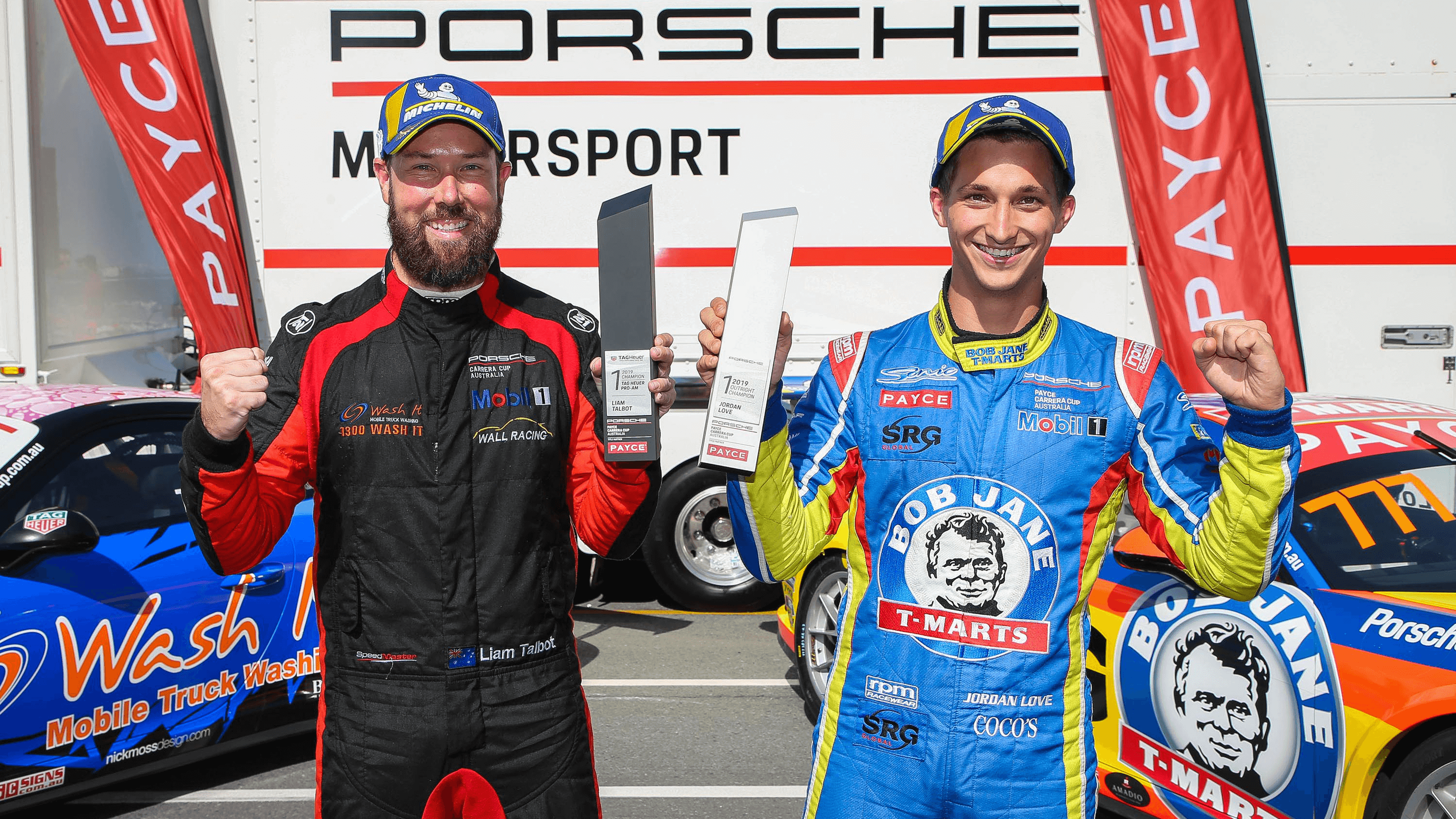 Jordan Love has completed one of the more remarkable comebacks in recent racing history by claiming the 2019 Porsche PAYCE Carrera Cup Australia Championship.

Liam Talbot clinched the TAG Heuer Pro-Am title in a dramatic day on the Gold Coast that saw both classes go down to the wire in the final race of the season. .

David Wall won all three races this weekend to claim his first overall round victory since the 2017 season, securing third position in the championship in the process.

Wall became the sixth different winner from the eight rounds this year, heading Cooper Murray and Cameron Hill on the outright podium.

Sam Shahin also completed a round sweep to take out TAG Heuer Pro-Am honours in Queensland, while Tim Miles posted his best result of the year in second and Dean Cook in third.

The big story, however, surrounded the remarkable championship battle between Sonic Motor Racing teammates that reverberated across a tension-filled day.

Leading by 14 points entering today’s pair of 17-lap sprint races, Love needed to only finish in front of Wood in each race to claim the championship – but of course it was never that easy.

A controversial touch between the pair on the opening lap of race two saw Love spun in the turn one chicane, dropping to the rear of the field.

While Wood continued on in third place, Love carved his way to finish the race in eighth position with his 14-point lead turning into a similar deficit in the title race. In front, Wall won the race ahead of a charging Cooper Murray.

However, Wood was later penalised 15 seconds by race officials for his role in the incident with his younger teammate; ensuring he finished seventh on corrected results and returning the title lead to his teammate in the process.

The pair started side-by-side in a tension-riddled finale with an ultimately straightforward race ending with Love finishing fifth and Wood seventh – following a post-race penalty for short-cutting the turn one chicane ensuring that Love sealed the championship.

Cooper Murray crossed the line first in the finale’, however he also copped a five second penalty for a kerb cut that handed the win, and a clean sweep of the weekend, to David Wall.

The 18-point final margin between the Sonic pair is the closest ever in Porsche PAYCE Carrera Cup Australia’s 15-year history: Love, at 20, also becoming the youngest ever winner of the championship.

The title story is made even more remarkable due to the fact that Love broke his hand during an incident at the mid-way point of the championship in Darwin.

He competed in Townsville soon after surgery and left Queensland more than 200 points behind Wood.

However a remarkable streak of wins at The Bend and Bathurst two weeks ago ensured he was able to return to contention in time for the final round this weekend.

It was Sonic Motor Racing’s first title since Nick Foster claimed the 2015 championship, the team finishing 1-2 for the first time ever.

Love backs up his 2017 title win in the Porsche Michelin GT3 Cup Challenge to showcase the strength of both the Porsche driver development Pyramid and Michelin Junior programs.

“It’s been an awesome journey and I can’t put into words how this feels right now,” Love said.

“I’m incredibly proud of the team and everyone who has helped me on the journey to get to this point here. I can’t explain it!

“After Darwin it was a case of head down, keep pushing and to come back from that is incredible.

“We’ve had some mega ups and some pretty low lows; it’s been one hell of a journey.

“It’s been an awesome battle with Dale all year. It’s tough competing against your teammate but it’s been awesome.”

Sonic’s 1-2 result is the first ever in the championship, Dale Wood recording his best ever finish since joining the series having led for a bulk of the year.

David Wall has finished first, second or third in each of the last four years and ultimately fell just 30 points short of the championship in third.

Meanwhile, Talbot’s victory in TAG Heuer Pro-Am came after a year-long battle with closest class rivals Adrian Flack and Roger Lago, with all three in the calculations entering this weekend.

Ironically, the Queensland based driver was an innocent victim in the crash that also claimed Jordan Love in Darwin – that incident ensuring neither driver scored many points in the top end yet still managed to rebound to claim their respective class championships.

Talbot, who claims the second title for Wall Racing in Carrera Cup history, ultimately won by just 30 points over Roger Lago, with Adrian Flack in third a further eight points back.

“I’m stoked – after Darwin we had a massive crash where Jordan and I got together. It wasn’t our fault but we both thought the championship was over,” Talbot said.

“Our guys just put so much work and effort getting the car back on track after the write-off and I just can’t thank the team.

“A national championship is just so special – what an amazing season. We’ve been building; we’ve had a lot of momentum. We had a lot of bad luck in the first part of the year but we put that out of the way, parked it, and said ‘lets do this’. It’s an amazing feeling winning the championship.”

The 2019 champions and prize winners will be celebrated in the annual Gala awards this evening on the Gold Coast, while the 2020 championship calendar will also be announced in due course.