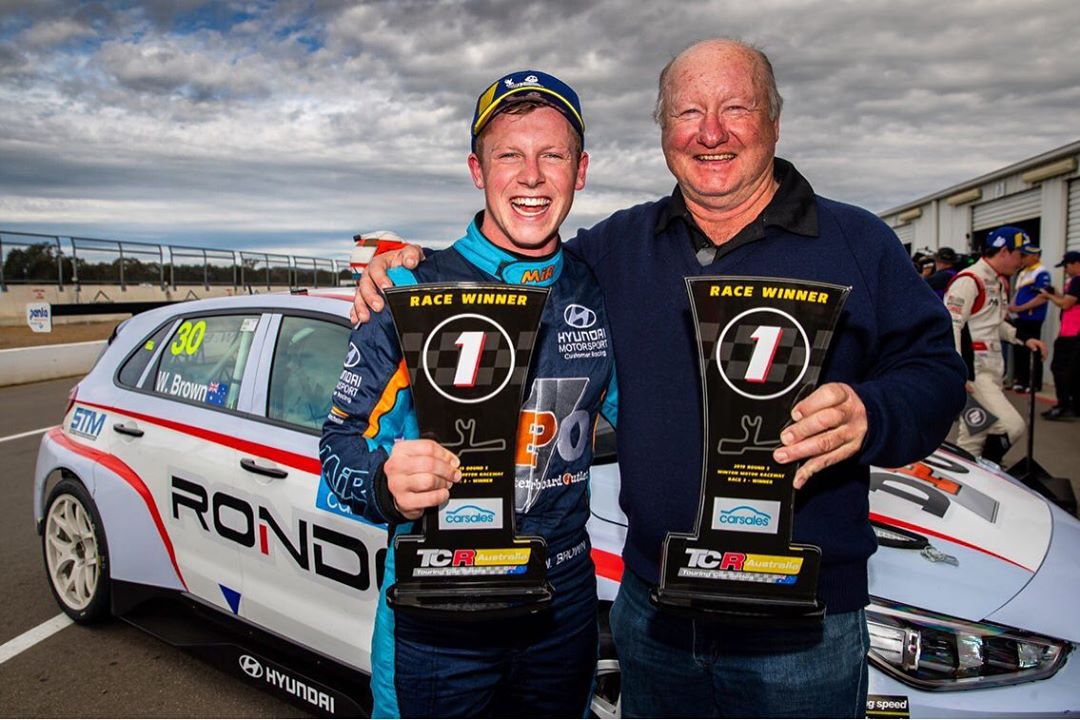 Series leader, Will Brown in the #30 Hyundai 130N continues to dominate the championship, with two wins and a second place at the Winton Motor Raceway round on the weekend extending his lead.

This brings Brown’s tally of wins to six from the 15 races conducted to date, with just six races in the two rounds remaining.

A field of 19 cars took to the track for Saturday morning practice and Brown was quick to top the times, although Wall Racing’s John Martin gave Brown’s time a shake, coming within 13/100ths of a second in the Honda Civic Type R. Jason Bright in the VW Golf GTi showed a return to form to finish third on times.

There was plenty of action across the practice session with two red flag periods as a number of drivers involved in altercations found the safety barriers.

Qualifying saw Brown once again on top of the timesheets, claiming pole for the afternoon race in a convincing manner, while Andre Heimgartner turned his fortunes around to finish second fastest after experiencing a run of bad luck in the two previous rounds. John Martin and Dylan O’Keeffe (Alfa Romeo Giulietta) were next fastest and filled the second row for race one.

In race one, Andre Heimgartner made the best of the start to take the lead before being gathered up by John Martin at turn seven, while Brown was shuffled back to fourth at the first turn. Jason Bright was quick to take advantage of a good start from sixth on the grid to be third at the end of lap one, and following contact on lap five between Martin and Brown, he inherited the lead when front-runner Martin suffered a puncture two laps later and Bright went on to record his second win since victory in the opening race in Sydney.

Although losing a couple of spots, Brown recovered to finish second ahead of Dylan O’Keeffe, who had his own issues with brakes. Heimgartner looked set for a good result up front until he overcooked a corner and slid wide, losing a number of positions.

Both Renault Meganes from the GRM stable with James Moffat and Chris Pither on board had issues that saw them back in the pits and non-finishers.

Wall Racing’s Tony D’Alberto (Honda Civic Type R) copped a five second penalty that dropped him two positions to sixth and Alexandra Whitley was penalised 30 seconds for running up the back of Leanne Tander under brakes, dropping one spot to be 13th.

Race two resulted in a convincing win for Will Brown who took the lead from Jason Bright with an inside move on the second lap and was never challenged to win by nearly eight seconds. Bright also had a relatively incident-free run to take second place, while a hard-charging Aaron Cameron in the VW Golf GTi finally found a way around Nathan Morcom (Hyundai 130N) to fill third place.

Will Brown completed a near-perfect round in winning the third and final race on Sunday. He was quick off the mark as the field headed to turn one and quickly established a comfortable lead that was never challenged.

It was a similar story for Aaron Cameron who brought the Melbourne Performance Centre VW Golf GTi home in second place, with Russell Ingall filling the final podium spot.

In what could have resulted in a massive pile-up at the start, Jason Bright stalled on the front row of the grid, but fortunately the field was able to weave around him as he finally got going and latched onto the rear of the field.

There were some strong battles back in the pack, with Jordan Cox and Tony D’Alberto fighting for fourth place before D’Alberto spun as he misjudged a pass on Cox.

Russell Ingall banked another podium spot (his fourth in the last six starts) in finishing third and Dylan O’Keeffe impressed with his charge from 15th on the grid to finish eighth.

The penultimate TCR Australia round takes place at Sandown on 20-22 September.