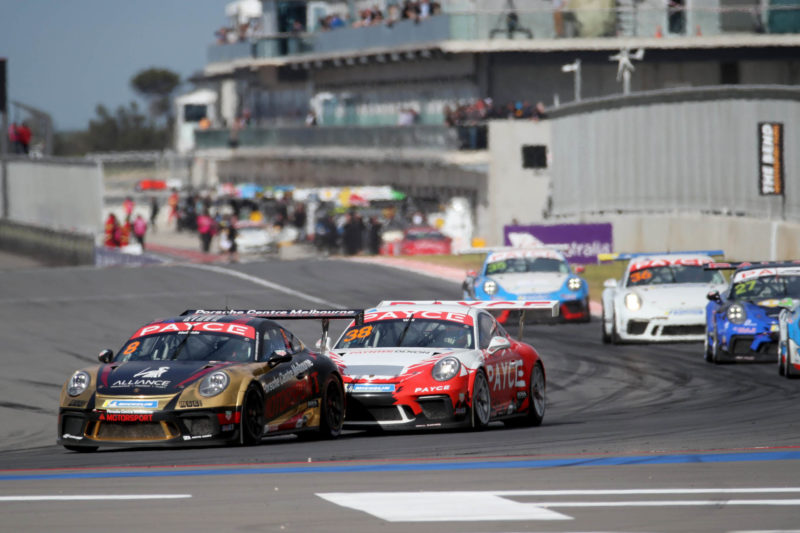 The Bend Round 6 Carrera Cup Wrap Up

Following the last round in Townsville where young Cooper Murray won all three races, round six at The Bend circuit in Tailem Bend produced yet another clean sweep, this time with Jordan Love winning all three races from pole. As well as winning the round, Jordan capped off the weekend with a new lap record.

Mixed weather across the weekend meant the 23 drivers had to contend with changing wind conditions along with light rain before some sunshine made an appearance.

David Wall in the #38 PAYCE Porsche was off to a good start on Friday, topping the times in practice one and setting a new lap record before dropping a couple of spots in practice two, but finishing third on combined times.

Qualifying on Saturday morning saw four Michelin Junior drivers – Love, Maxwell, Hill and Murray – set the top times and fill the first two rows for race one. David Wall set his fastest time for the weekend to put the #38 PAYCE Porsche on the third row of the grid in fifth spot.

The opening race was marred by several cars coming together as they headed into turn one. Cooper Murray spun in front of the pack, collecting Maxwell and forcing Almond to take evasive action off the track. By the end of the first lap as the field settled down, it was Love in the lead with Hill and Talbot following in hot pursuit.

Back from the leaders, David Wall had his own battle with Cooper Murray and Warren Luff before he shook them off to regain his starting position and finish fifth.

Love had to survive a number of challenges as first Hill took the lead on lap three, then Talbot pulled off an inside move that briefly gave him the lead before losing it under brakes to put Love back in the lead.

Series leader, Dale Wood had more than his share of bad luck with two punctures relegating him to the rear of the field.

In second place was David Wall, showing improved form and experience in the longer races, while ProAm driver, Adrian Flack finished close on Wall’s tail to complete the podium.

Love had to work hard for his victory as first Hill led out of turn one and Nick McBride snatched second spot when Love ran wide still on the opening lap.

A number of off-road excursions saw some drivers lose position and require some repairs back in the pits before resuming racing. It wasn’t until lap eight that Love finally regained the lead and found clear air. Back in the field it was a five-way battle for the minor places, with David Wall finally winning out to take a well-earned second place from Flack.

Dale Wood impressed to come home eighth after starting at the rear of the field, while Steve Richards had the misfortune to be sidelined before the start after suffering a clutch failure on the warm-up lap.

Jordan Love continued his domination with a clear win in the third and final race after a strong start off the line from pole. David Wall also found good pace to take another second place after seeing off a serious challenge from Cooper Murray. The two swapped positions a number of times before Wall got the upper hand and took the chequered flag ahead of Murray.

Jordan Love’s clean sweep gave him eight wins for the season and the round win. David Wall had his best result in the #38 PAYCE Porsche since the opening round in Adelade, finishing runner-up for the round and third on the Outright leaderboard.

Jordan Love’s outstanding form has resulted in him being declared Australia’s representative in the Porsche Junior Shootout in Europe later this year.