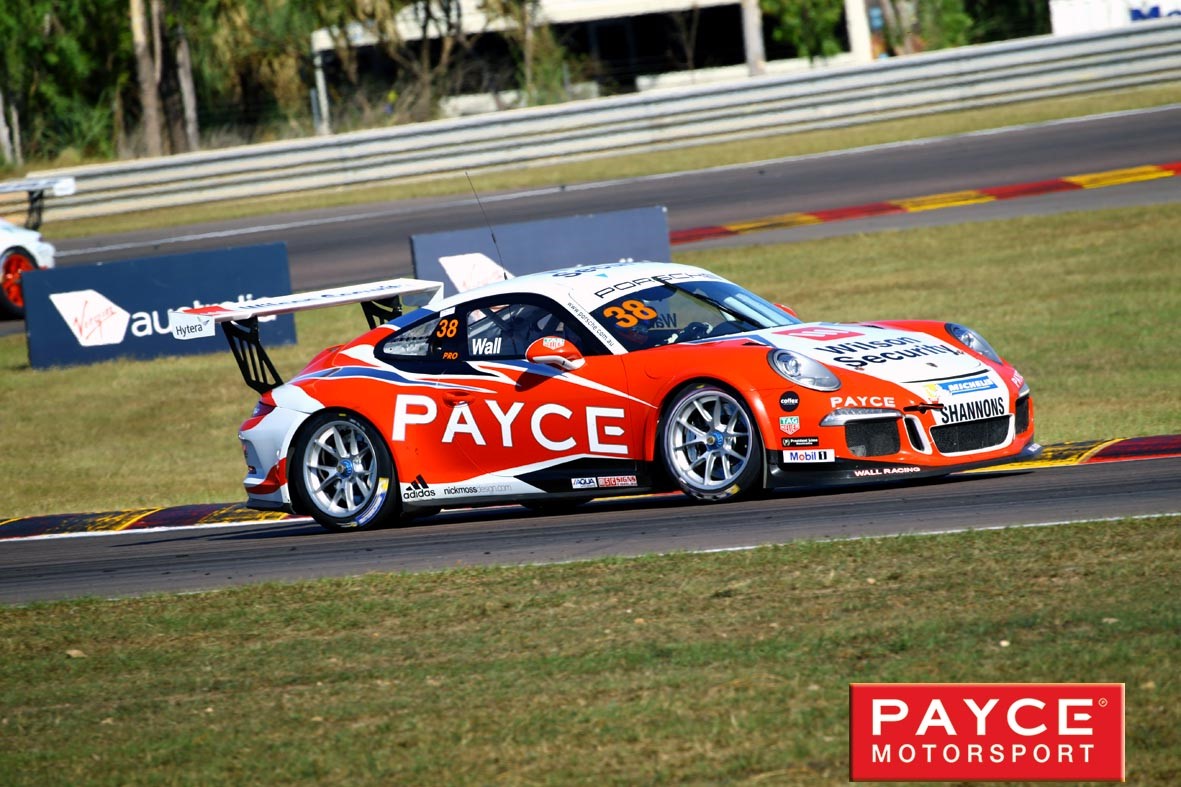 After a run of second placings and a race win in the opening round at Adelaide, David Wall has finally taken out his first overall round win in the Porsche Carrera Cup Australia driving the #38 PAYCE Porsche 911 GT3 Cup.

Sharing the driving with David in this year’s Pro-Am round at Phillip Island last weekend was Shane Smollen. The duo won the Outright Class for round three of the championship after the results from Saturday and Sunday’s one-hour races were combined.

The win puts David just 10 points behind championship leader, Andre Heimgartner, with five rounds to go, including the final round at the Gold Coast 600 in October.

Shane had previously competed successfully in the Carrera Cup Challenge class, and was lured out of semi-retirement by Wall Racing to make them one of the strongest teams in the Pro-Am round.

David said: “With Shane’s experience in the series and winner of the 2015 Challenge Class he was a great asset to the team.”

The practice sessions on Friday were a mix of fortunes with Shane recording 6th fastest of the 15-Am field in the first session. He was only 6/10ths of a second off the fastest time, which showed he was still competitive despite his break away from the series. David put in a good time of 1:31.4067 in the next session for Professionals to take third fastest time. The final session for combined drivers was disappointing for the team, with the #38 Porsche down in 9th place on times.

In qualifying, David was 10th in the first session and Shane finished his session strongly to take 4th fastest time, giving the team 6th place on the grid for race 1 when the fastest times of the drivers in both qualifying sessions were averaged out. Stephen Grove and Supercar driver, Tim Slade grabbed the pole. With just 6/10 of a second separating the first six cars, the series lived up to its reputation of being the most competitive one-make series around.

Race 1 saw the #38 Porsche away well and within three laps had moved up a spot and was holding off all challenges. After the compulsory pit stop, David was able to capitalise on the good position and progressively moved closer to the lead, snatching second place on the last lap to come home with a podium finish. Nick McBride and Dylan Thomas crossed the finishing line 10 seconds ahead of the #38 PAYCE Porsche for a convincing win.

Race 2 on Sunday saw conditions dramatically change with rain showers moving across the region. Teams were faced with the choice of wet or dry tyres and those who elected to go with dry tyres soon found their cars back in the pits for a changeover as the rain persisted.

When the flag dropped, the #38 car was quickly away from the front of the grid as the pole-sitter stalled, but was relegated down the order as grip became a major challenge, but managed to stay in the top 5. By lap 9, the rain had stopped and times went up but, shortly after, the safety car was out when one of the Porsches hit the outside of the pit wall and was left stranded until the rescue truck could safely remove it. Both David and Shane ran a sensible and steady race and were able to steer clear of the dramas around them to amass enough points with a 4th placing to give them the honour of round champions. The drama-filled race was won by Dean Grant and Lee Holdsworth.

David said it was a nice change to finally take a trophy home with the number one on it.

“We were after as many points as possible this weekend and it’s been great for the championship,” he said.

Porsche Carrera Cup organisers used the event to announce the introduction of a new car and class structure for 2018. The number of professional drivers will be limited to 10 in an effort to encourage more amateur drivers into the category. A target of 24 starters has been set which would significantly increase the number in recent times, with 15 cars gridding up for the most recent round at Phillip Island (9 Outright/6 Challenge).

News of the new and faster car for the 2018 season was welcomed as the category shifts to attracting more amateur drivers who may then go on to bigger and better things in the future. A good performance can take a driver overseas to race in this international category, as evidenced by Matt Campbell who found excelled first in the Challenge class then in the Outright class before moving to Europe this year to further his career. He competed in the Monaco GP curtain-raiser over the weekend where he finished a credible 5th against a top field.

The next round of the Porsche Carrera Cup Australia championship will be at Hidden Valley outside Darwin on 16-18 June.